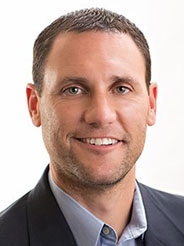 Chad was born and raised in Garden City, Kansas. He graduated from Holcomb High School in 1997 where he played multiple sports. Chad continued his basketball career at Garden City Community College and then transferred to Fort Hays State University where he continued his education and earned his Bachelor’s Degree in 2002. Chad received his first teaching job in Plains, KS and has been in the education system ever since. In 2002, Chad started his coaching career and is now the head Men’s Basketball Coach at Holcomb High School, where he lead his team to victory at the 2015 Class 4A-II State Championship.

Chad married his wife Aaron in 2004 and has two boys Eli and Ace. Growing up and living in Southwest Kansas his entire life, Chad has a great understanding of how people in this area want to be treated. He obtained his Kansas Real Estate license in 2014 and is working to become the top REALTOR® in the area. Mr. Novack excels in working with Sellers and Buyer to accomplish their Real Estate goals.

Chad specializes in Farm and Ranch, but welcomes all Real Estate inquiries and works hard to earn your business, whether you are buying or selling. Chad is a hard-working, honest individual that is ready to gain your trust and looks forward to guiding you through the Real Estate process.

You don't have any testimonials .

Each Office Independently Owned And Operated. The information provided herein is deemed accurate, but subject to errors, omissions, price changes, prior sale or withdrawal. United Real Estate does not guarantee or is anyway responsible for the accuracy or completeness of information, and provides said information without warranties of any kind. Please verify all facts with the affiliate.
Copyright© United Real Estate
Privacy Statement-Terms Of Use

Leave a message for Chad